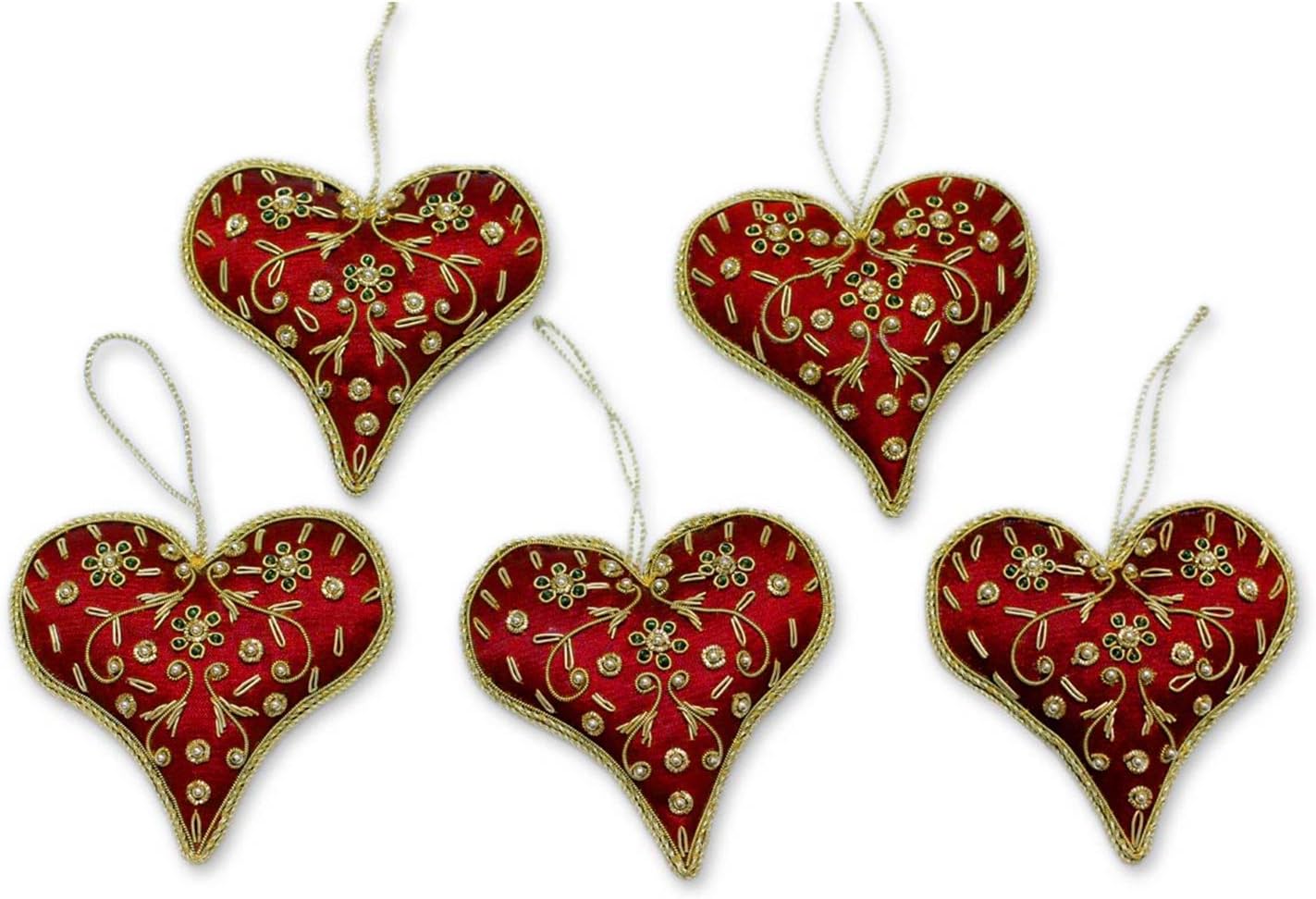 NOVICA, in association with National Geographic, works together with talented artisan designers around the world to produce stunning, keepsake treasures. Our mantra is to spread global happiness, so rest assured - weâll do everything we possibly can to ensure youâre a happy customer. About this item: Deep wine colored hearts are brimming with passion. Covered with glittering zardozi embroidery, beadwork and diminutive flowers, the handcrafted ornaments are luxurious. Parvez A. Warsi crafts the beautiful set of five to showcase traditional Indian arts. Warsi includes a drawstring pouch; its colors may vary. - Dry clean only About our Artist: Parvez A. Warsi was born into the world of Indian handicrafts. 'My ancestors began stitching royal clothing for kings, queens, princes and princesses. I got into tailoring, for the general public. Then, I joined my brother-in-law who was into crafting decorative items with embroidered motifs. A few years later, I started my own workshop, specializing in gift items, wall hangings, evening bags, etc., all featuring fine embroidery.'

Each item is handmade by the artisans that NOVICA partners with. Due to the handmade nature of our items, small variations in color, shape, pattern, or other characteristics may be evident. Each piece should be considered as a truly unique work of art, lovingly crafted by hand.

These dolls can be used to add a unique touch to any gift wrap or party favor.

Glass beads have been used as decoration, providing texture and sparkle.

Embroidered details add a handcrafted touch and delightful details to entertain the eye.

Artisan Crafted by Parvez A. Warsi

Parvez A. Warsi says, 'I have a longstanding relationship with the world of handicrafts. It all started when my ancestors began stitching royal clothing for kings, queens, princes and princesses. As time passed by I got myself into tailoring, though not stitching clothes for the royals but for the general public. Then, I joined my brother-in-law who was into crafting decorative items with embroidered motifs. I began to work with him in 1974 and helped him for almost eight years. In 1982, I started my own workshop of crafting gift items, wall hangings, evening bags, etc., all featuring embroidery work. During this time I was still involved in designing and stitching dresses with embroidered motifs.'

Warsi includes a drawstring pouch; its colors may vary.

Effect of Romantic Movies on a Child's Mental Health

Five 'Must-Haves' During This Festive Season

How to Avoid Hysterectomy for Common Gynecological Condition

Obesity Not Linked to Overeating

Stress may be Related to Cardiovascular Events

How Do Viruses Mutate and Why Does it Matter?

Effect of Violent Cartoons on Children's Behavior and Mental State

A measure of body fat in adults

The blood sugar chart gives you the fasting glucose values and glucose tolerance test values for normal people and people with early diabetes and established diabetes. Also use the calculator to find out if you have diabetes.

Are you pregnant? Use Medindia�s simple and useful calculator to find out whether you are pregnant or not.

Calculate the ideal weight of your baby with Medindia�s Infant weight calculator.

To Take Care of Your Diabetes

Which Medical Specialist (Doctor) should I Consult for my Condition?

Which COVID vaccine would you opt for?

OK, I agreeNo, give me more info